Why import gas from Russia if we can heat our homes and businesses with geothermal energy? This sustainable energy is seen by many as the ultimate alternative to gas. Yet many people are still wary of it. “Unnecessary”, says CEO Marit Brommer of the International Geothermal Association (IGA).

The use of natural heat in the Netherlands is not new. In the Westland region, it has been used for years to heat greenhouses. And here and there, there are small-scale projects using energy from the underground to heat homes. But the largest and most promising project in our country is the Geothermal Central in The Hague, where geothermal energy has recently been used to provide energy for thousands of homes in the area. The eyes of the whole of the Netherlands are on this initiative. Because if it is successful, for geothermal heat can be drilled in many more places.

Geothermal energy makes use of energy from hot water (80° Celsius on average) that is pumped up from the deep earth’s strata. The cooled water is then pumped back into the ground via another well, so that there is no loss of pressure. An ideal alternative to gas. But compared to the fossil industry, as well as the sustainable solar and wind energy sector, the geothermal industry is only a small player worldwide. “We are still dwarfs in the energy transition, but our ambition is to become giants”, says Brommer. “That is only possible if you get people on board.” 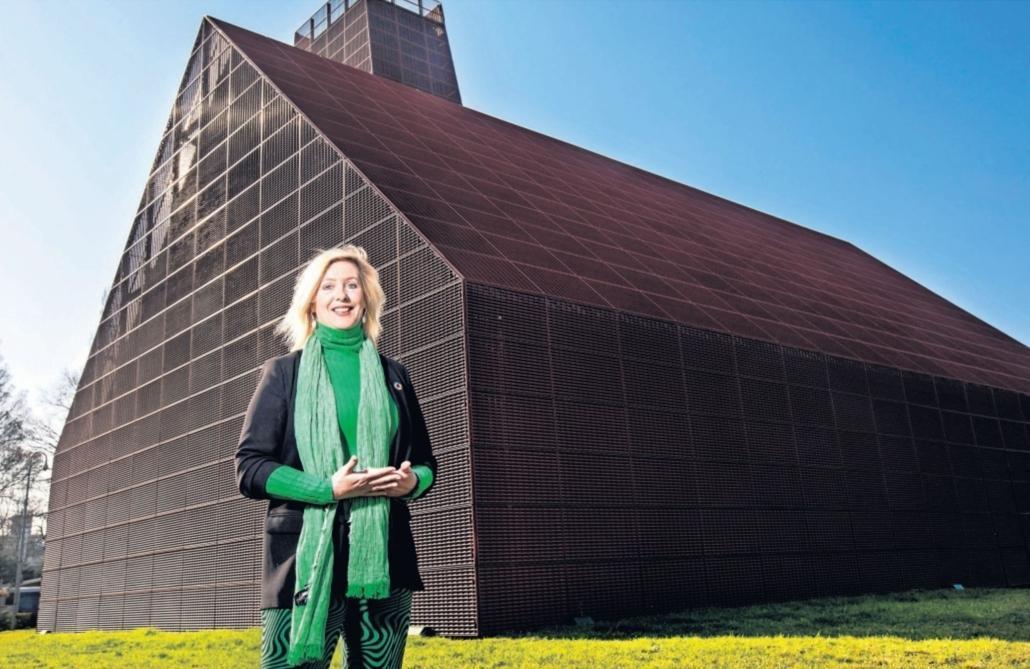 Marit Brommer in front of the geothermal power plant on the Leyweg in The Hague. Photo by: Frank Jansen, ad.nl.

To be able to scale up, it is important, according to Brommer, that as many successes as possible are shared in the countries where geothermal energy is already being used or experimented with. Now geothermal energy is still mainly used to generate electricity, as is the case in Italy. The oldest power station there, in Tuscany, has been generating energy for 110 years. “It is still working. It is an inexhaustible source.” There are also good experiences with geothermal energy elsewhere in the world. For example, countries such as New Zealand, Iceland and Costa Rica are completely independent in terms of energy supply, thanks in part to geothermal energy.

In the future, it expects other countries to increasingly see the benefits of this sustainable energy source. There are several reasons why this has not happened so far. “The need was not so great until now.” That situation has now changed. Not only because of the enormous gas prices due to the conflict in Ukraine, but also because many European countries are in danger of not meeting their climate targets.

One of the problems so far has been that geothermal energy is not easy to finance. “That has to do with risk. When drilling for oil, it is profitable to be successful one time out of ten. With geothermal energy, it must be successful nine times out of ten. Worldwide, some subsidy money is always needed to cover the initial costs. But that is also what happened at the start with solar and wind energy”. Private investors are not so quick to get involved now because the profit margins are not yet high.

“Geothermal energy is also difficult and complex because you must drill. So, you must deal with a lot of licences and the question of who owns it? Wind and solar energy are not claimed by any country, but under the ground it’s different”. Here in the Netherlands, it is the state that grants the licence.

Despite all this, Brommer thinks it is only a matter of time before the big energy companies get into geothermal energy. “It’s all about when the earnings model becomes interesting for large companies like Shell, which has already gone into geothermal energy.” With the war in Ukraine, the absurdly high prices for gas and the rapid climate changes, this might happen quite quickly.

Experience abroad shows that it is possible to use this energy on a large scale. Brommer points out that some Chinese cities already run entirely on geothermal energy to combat smog. “That is an enormous drive to develop geothermal energy.” In Europe, too, she sees that developments are moving fast. In Munich, 40 per cent of houses are already heated by geothermal energy. And in The Hague, geothermal energy is seen as a game-changer.

It was also one of the reasons for the international organisation, which lobbies for geothermal energy worldwide, to settle permanently in this city last year. “You also have all kinds of international institutions here, which makes it easier to approach parties. In addition, there is a horticultural sector here that wants to switch to sustainable energy, and a developing city with political support, the presence of large energy companies with a lot of knowledge and a world port nearby. All the ingredients are here to make The Hague a Geothermal Valley”.

At the municipality of The Hague, they would like nothing better. Laurens Kok, head of The Hague Business Agency, points out that the city has traditionally been home to many energy companies such as Shell, Aramco and Total, with a total of some 10,000 employees. In recent years, however, The Hague has been fully committed to the energy transition. The arrival of an international organisation such as the IGA fits in perfectly with the municipality’s objectives and will accelerate the sustainability of the sector, Kok expects. “An additional advantage is that we are bringing new business to this old sector, which is already so big. Thousands of people are already busy generating energy worldwide. What we want is to retain those jobs, but for those people to focus more on sustainable energy.”

To scale up, you need the knowledge and money of the oil and gas sector. “That is available in The Hague. So, there is an opportunity to pick it up here. Most countries are busy generating electricity. We’re not going to do that here. That is a completely different application. If this is successful here, we will immediately have an export product.“

Brommer has noticed that many Dutch people are still wary of geothermal energy because they are afraid of tremors, among other things. But the chance of that happening in our country is very small due to the composition of the subsurface, she knows. “The subsurface is always exciting, as a geologist I know. We make predictions, but it can always be different from what you thought.”

According to her, the risks are mainly in areas where you have fractures. “If you put water back into the ground, it can cause a pressure difference and you can have quakes. That chance is 2 to 3 per cent.” That has happened in the past in South Korea and Switzerland. “And when that happens, it has an enormous impact, especially in people’s perspective.” In South Korea, for example, it is now completely at a standstill.

In this area we don’t have to worry about that, she assures us. There are no large fractures here, so she considers the chance really very small. The process is also different here than elsewhere. We pump hot water up here, while in South Korea, for instance, they injected cold water into the ground and pumped it up again later when it was warm. “We only drill here if we know for sure that it is possible.” In the Netherlands, the subsurface has also been well mapped out because of gas extraction. “That’s why there is so much knowledge here.”

To allay people’s concerns, there should be much better communication with residents in the Netherlands about geothermal energy, Brommer believes. “In Munich, the mayor went round the doors in person and explained: ‘this is what we are going to do’. It will cause three months of inconvenience, but after that you will have clean air. You can get those who are against it to go along if you make them share in it. For example, by lowering their energy costs.”

Geothermal energy could also provide a solution for the high energy prices of entrepreneurs and residents. “Four out of ten growers go bankrupt due to the energy costs.” Now, the price of geothermal energy in the Netherlands is still linked to the price of gas. “But that should be abandoned immediately”, she says. “Of course, we have to make money, but it is crazy to generate local energy with global prices.”

The original article has been published in Dutch language on AD.nl:
https://www.ad.nl/den-haag/hoe-komen-we-van-het-gas-van-de-russen-af-gewoon-met-meer-aardwarmte~a650b286/

Experience Geothermal: Building the future of energy together